Population centers around the central valley, with emphasis on the capital city of Tbilisi in the east; smaller urban concentrations dot the Black Sea coast, with Bat'umi being the largest

The region of present day Georgia came under Roman influence in the first centuries A.D., and Christianity became the state religion in the 330s. Domination by Persians, Arabs, and Turks was followed by a Georgian golden age (11th-13th centuries) that was cut short by the Mongol invasion of 1236. Subsequently, the Ottoman and Persian empires competed for influence in the region.

Georgia was absorbed into the Russian Empire in the 19th century. Independent for three years (1918-1921) following the Russian revolution, it was forcibly incorporated into the USSR in 1921 and regained its independence when the Soviet Union dissolved in 1991.

Like most indigenous Caucasian people groups, the Georgians do not fit into any of the main ethnic categories of Europe or Asia. The Georgian language is neither Indo European, Turkic, nor Semitic. The country has mostly had Western-leaning or pro-Western leadership since the Soviet breakup.

SGA partners help support Georgian evangelical churches through support of missionary pastors and church-based biblical training through our Antioch Initiative, children’s ministries including Immanuel’s Child and summer camps, as well as provision of Bibles and other literature resources. 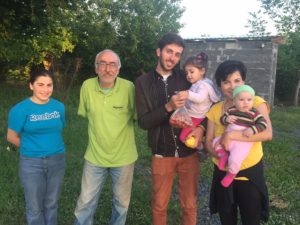 Faithful Ministry in the Republic of Georgia

My time in Georgia has been wonderful beyond words. The brothers who are participating in Bible training classes are humble, they love the Scripture, they love others, and they are sacrificially serving the King of Kings.