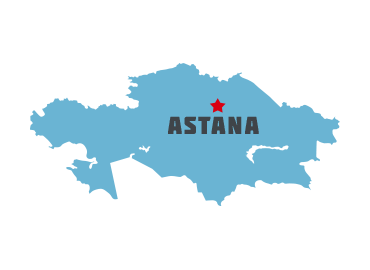 Kazakhstan is the largest of the former Soviet republics in Central Asia. Ethnic Kazakhs—historically a mix of Turkic and Mongol nomadic tribes who migrated to the region by the 13th century—were rarely united as a single nation. The area was conquered by Russia in the 18th century, and Kazakhstan became a Soviet Republic in 1936. Soviet policies reduced the number of ethnic Kazakhs in the 1930s and enabled non-ethnic Kazakhs to outnumber natives. During the 1950s and 1960s, Soviet citizens were encouraged to help cultivate Kazakhstan’s northern pastures. This influx of immigrants (mostly Russians, but also some other deported nationalities) further skewed the ethnic mixture.

Non-Muslim ethnic minorities began leaving Kazakhstan in large numbers from the mid-1990s through the mid-2000s and a national program has repatriated about a million ethnic Kazakhs back to Kazakhstan. These trends have allowed Kazakhs to become the majority again. This dramatic demographic shift has also changed the previous religious diversity and made the country more than 70% Muslim.

Kazakhstan’s economy is larger than those of all the other Central Asian states largely due to the country’s vast natural resources. SGA helps national evangelical churches through sponsorship of missionary pastors, and biblically sound training through the Almaty Bible Institute. Children’s ministries such as Orphans Reborn, summer camps, and Immanuel’s Child are also supported, along with much-needed Compassion Ministry.