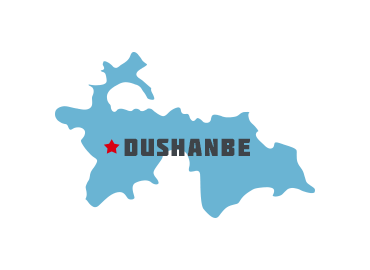 The country's population is concentrated at lower elevations, with perhaps as much as 90% of the people living in valleys; overall density increases from east to west.

The Tajik people came under Russian rule in the 1860s and 1870s, but Russia’s hold on Central Asia weakened following the Revolution of 1917. Bands of indigenous fighters fiercely contested Bolshevik control of the area, which was not fully reestablished until 1925. Tajikistan was first created as an autonomous republic within Uzbekistan in 1924, but Soviet communist leaders designated Tajikistan a separate republic in 1929.

Ethnic Uzbeks form a substantial minority in Tajikistan, and ethnic Tajiks an even larger minority in Uzbekistan. Tajikistan became independent in 1991 following the breakup of the Soviet Union, and experienced a civil war between regional factions from 1992 to 1997.

The country remains the poorest of the former Soviet nations. Its economy continues to face major challenges, including dependence on remittances from Tajiks working in Russia, charges of corruption, and the opiate trade in neighboring Afghanistan. SGA partners help Tajik evangelical churches by supporting the ministries of missionary pastors and biblical training at the Tajik Bible Institute. SGA also assists these churches through supporting Children’s ministries through Orphans Reborn, summer camps, and Immanuel’s Child, along with providing food and other humanitarian aid as needed through Compassion Ministry.

Preparing faithful pastors, teachers, youth leaders and children’s workers for lifetimes of ministry is vital for evangelical churches across Russia and SGA partners are committed to helping them.